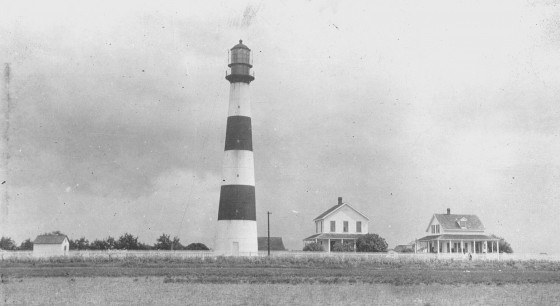 History of the Bolivar Point Lighthouse

The Bolivar Point Lighthouse is one of the few 19th-century lighthouses remaining on the Gulf Coast, and one of only two remaining iron lighthouses in Texas. Built in 1872, the Bolivar Point Lighthouse was first lighted November 19, 1872, and operated until it was retired from service on May 29, 1933. The light shined every night during its 60 years of service, except for two nights during a 1915 hurricane which destroyed the oil house.

On September 8, 1900, during the deadliest natural disaster of US history—the Galveston Hurricane of 1900—the lighthouse withstood savage winds and safely harbored 125 refugees, many of whom had waded through waist-deep water to escape the rising storm surge that engulfed their train. They collected rain water and survived on the limited foodstuffs the keeper and his family had brought into the structure. The rest of the 85 passengers perished in the raging waters.

Fifteen years later in the hurricane of 1915, when winds reached 126 miles per hour and the lighthouse top swayed twelve inches from side to side, 61 people took refuge within its walls, sitting two to a step on the iron stairway. The tower’s vibrations prevented the mechanical rotation of the lens, but the keeper turned it by hand until the oil supply washed away. Though the hurricane forced open the lighthouse door, filling the base with an 11 foot storm surge and waves crashed against its walls, the lighthouse withstood the storm.

On November 15, 1917, the Bolivar Point Lighthouse was accidentally shelled by artillery fired from Fort San Jacinto. Nobody was injured, and again, the lighthouse survived.

Hurricane Alicia hit in 1983 and Hurricane Ike hit in 2008. Ike ripped the finial off the top and plunged it into the marsh. It also wiped out the brick kerosene house and other buildings on the grounds. The water was over eight feet deep and within 18 inches of coming inside the houses. You can see the gouges on the iron supports of the assistant keeper’s house.

In 1933, at the peak of the Great Depression, the Bolivar Point Lighthouse was declared obsolete, and its light was extinguished on May 29, 1933. Since its auction in 1947, the Point Bolivar Lighthouse has been privately owned and maintained by descendants of E.V. Boyt and his sister Ila Maxwell.